The Campaign Trail Is No Place for Sissies or Non-believers 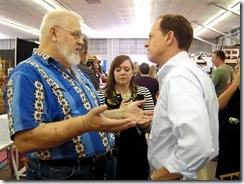 To run for political office you need to believe in "something"…yourself, your principles, perhaps even your party. In this current environment, you also need the skin of an alligator, the endurance of an athlete, and a will of iron.

All those things were on display during the time I spent with Pat Toomey and his staff. The story of my time on the road with the campaign, from a foot-stomping welcome at State Committee in Harrisburg, through the Godâ€™s country of Pennsylvaniaâ€™s northern tier on the way to the Bloomsburg Fair, and on to the Lackawanna Victory Center, is posted on The Daily Caller. http://dailycaller.com/

It was a fascinating look inside one of the county’s most closely watched races. It’s hard to think of two candidates who more directly appeal to their base and who offer the voters in the general election such a clear-cut choice for the future direction of the country.