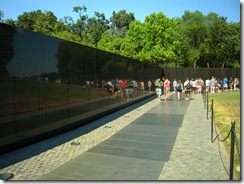 I donâ€™t know what it says about us as a species, but somehow we humans manage to have a war every ten to twenty years; as if each generation needs itâ€™s own bloody touchstone. For my group of Baby Boomers, it was and is, Vietnam.

Since the Vietnam Veterans Memorial, â€œThe Wallâ€, was dedicated in 1982, Iâ€™ve wanted to go there. On each subsequent trip to Washington, time and schedules conspired against me. Last week, I finally made it.

Iâ€™ve been to many nationally significant and historic sites, from Gettysburg to Ground Zero three months after the attacks. Each place has itâ€™s own energy; itâ€™s own ghosts that stand guard over their tragic legacy.

For me, The Vietnam Wall holds not ghosts but memories of friends and classmates, including the boy who took me to the Junior Prom. Iâ€™ve written of Greg, my other lost friends, and the Vietnam era impact, before. "The Morning Call" continues to carry one of those columns on its website. But I was still unprepared for the gut punch of that long black monolith of loss.

Before I found any of the names I was looking for, tears were streaming down my face. Gregâ€™s name was too high for me to make a tracing. I left a note so he would know heâ€™s not forgotten. Many people do the same. The day I visited, the space at the bottom of the wall held flowers, teddy bears, military insignia, and several bracelets that are only to be returned when the person whose name is on them comes home, is identified, or when the wearer is no longer able.

One bracelet was accompanied by a note that read, â€œJonathan, Welcome Home! I apologize for taking 23 years to return your bracelet. It (and another) belonged to my grandmother who wore it until her passing in 2000. I inherited the bracelets partly because I knew of their significance. A few years ago I was able to find out you had returned but was unsure what to do with the bracelet. Since the internet I was able to find out that bracelets of the returned should be left at The Wall, so here it is. I want you to know that generations of my familyâ€¦ The rest is unintelligible, but it doesnâ€™t take much imagining to fill in the blanks: Several generations of an American family thought about a stranger lost thousands of miles from home, every day of their lives.

Washington is filled with memorials to heroes who saved the nation and warriors who made the ultimate sacrifice. Each generationâ€™s war has its marker; Korea, both World Wars, and Vietnam. Only The Wall holds the names of its fallen: Black slab after black slab of courageous young men and women who never came home.

I wonder what this current generationâ€™s Iraq and Afghanistan memorial will look like?