The Academy Awards, the tragic death of a beautiful young woman in California, the arrest of an Al Qaeda leader, flashed across our news screens and newspapers the past few days. Unless youâ€™re a real news junkie, you could have easily missed an event that didnâ€™t receive much coverage in the main stream media.

To paraphrase an old newspaper sloganâ€¦Since it no longer bleeds, at least not American blood, it no longer leads. While odds were being placed on who was going to win best actress, 55% of the voters in Iraq went to the polls. Thirty-eight of them paid with their lives, thousands of our sons and daughters did too, which is why I thought the event worthy of more attention. 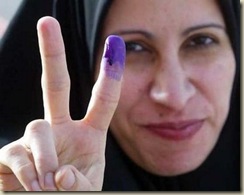 According to CNN, a woman standing in line to vote said it was her way of fighting back at the terrorists, another, who brought her two young daughters with her to the polling place said she had heard bombs go off and was scared but felt she had to come. It makes one wonder how many of us would do so under similar circumstances.

It is also worthy of note that the new Iraqi Constitution calls for 25% of the members of Parliament to be women. Not only did women across Iraq show their courage and determination by votingâ€¦they showed it by running.

The time for debating the validity of the war is long gone. The sacrifice of blood and treasure has been beyond measure. But we are where we are.

Letâ€™s hope that place is the beginning of a stable future for Iraq.