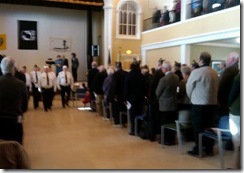 Bright white sunlight streamed in to the auditorium of the new Veteranâ€™s Sanctuary in Allentown, PA, lighting the way for the color-guard as they marched up the aisle.

It was gratifying to see the turnoutâ€¦the large room was filled to capacity, as was the upper balcony that surrounds it. Many VIPâ€™s and elected officials were in attendance including U.S. Senator Bob Casey and Lehigh County D.A., Jim Martin.

Community support is crucial to the success of the Sanctuary and to its residents. During an afternoon workshop, a great deal of emphasis was placed on the importance of the soldiers feeling that they have been accepted back in to their community so they can resume their civilian lives.

As our Vietnam Veterans age, and as our current veterans cope with multiple deployments, the Veteranâ€™s Sanctuary will become an increasingly important safe haven for our soldiers and their families. They are currently trying to raise funds through a â€œBuy a Brickâ€ campaign. For $100 you can add an engraved brick memorializing the name of a soldier or family member, to the Sanctuaryâ€™s outside walkway. This is an effort worthy of our support.