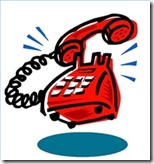 There are certain markers in politics. Across the country, fall elections begin in earnest after Labor Day; in Pennsylvania, where our spring Primaries usually donâ€™t happen till May, this year itâ€™s May 18, everyone gets serious right after Easter. So it wasnâ€™t surprising to pick up my phone and hear an automated message telling me they werenâ€™t selling anything, that my political opinions were very important, and I should press 1 if I was willing to take a survey.

The questions focused mostly on the 15th Congressional race between Charlie Dent and John Callahan. On a sliding scale, how favorable was my opinion of each candidate. Was I definitely going to vote for one over the other or was I only â€œlikelyâ€ to vote for one of them. And did I feel aligned with how Dent voted on the issues.

There were some â€œcoattailâ€ questions, too, from the Statehouse to the White House. Was I likely to vote for Corbett or Onorato for Governor, and what kind of job did I think President Obama was doing, including rating my opinion about healthcare. I answered very calmly and professionally, relieved that they didnâ€™t get my husband on the phone instead of me.

When it came time for the stats, I was surprised at two things, how much emphasis there was on race: I must have been asked three different ways if I was Caucasian or Hispanic. And another three questions about labor unions, from was I a member, was a spouse or next of kin a member, down to â€œIs anyone living in your household a member?â€.

There was no mention of Dentâ€™s Tea Party Primary opponent, so it appears heâ€™s been dismissed as not even a factor. And from the emphasis on unions, it looks like siphoning off their members, who have made no secret of their anger over the healtchare bill, away from the Democrats, may be a new strategy for this mid-term election.

The poll was so well done that I canâ€™t be exactly sure who paid for it. If I had to bet, Iâ€™d say the Dent campaign or the National Republican Congressional Committee. I called Dentâ€™s headquarters for comment, but my call was never returned. I guess they donâ€™t know about political markersâ€¦Easter is over, Press 1 to talk to your constituents.