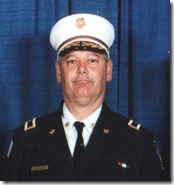 One of Allentownâ€™s most devoted native sons has left us. Brian Mickley was a rare breed in so many ways: A true Allentonianâ€¦born, raised, educated, married, employed, in the city he loved.  And when Brian was committed, he stuck. That level of character is something you donâ€™t see much of these days.

Brian married his childhood sweetheart, Carol Schneck. They met when she was 14, he was 16.  You only needed to be in their presence a short time before you realized they were soul mates.

He always wanted to be a firefighter and became one at 19, rising to the rank of Chief which was the culmination of a lifetime dream. It didnâ€™t end well because Brian was incapable of playing politics. As his long- time executive assistant, Linda Hanna said, â€œHe is egoless. Some people donâ€™t recognize that style of leadership.â€ Even as Chief, he was highly regarded by his men. I.A.F.F. Local 302 has a moving tribute on their website.

In this day of self-aggrandizement and me, me, me focused society, Brian Mickley stood out like one of those old-time western heroes: Tall, imposing, and quiet. Being in his presence was reassuring because you had the feeling that no matter what happened, Brian could handle it. But if you looked closely, you could always see a twinkle in those blue eyes.

Brian Mickley lived his life in love and service to his family, friends, and his city. He volunteered with local fire departments, taught young firefighters how to stay alive, and shared his â€œother loveâ€, astronomy, with a generation of children at the Lehigh Valley Planetarium on South Mountain.

Speaking for myself, I will never again look up in the night sky without thinking of him.

Brian will be dearly missed by his family and friends. For the city of Allentown, the loss is irreplaceable.

Bloggerâ€™s Note: When Brian retired from the Allentown Fire Dept., I wrote a tribute to his  service. That story is available online at The Morning Call.

8 thoughts on “In Memoriam: Brian Mickley”