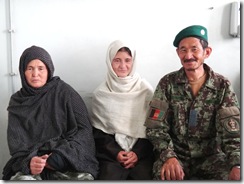 As my European friends would say, Iâ€™m â€œon holidayâ€ this week. Translated in to American, that means Iâ€™m on vacation, so I was not planning to post my regular â€œWoman Warrior Wednesdayâ€ feature. Then, out of the blue, came these photographs of Zarghona, the young Afghan girl I found dying in a hospital in Kabul in 2006, now looking very happy with her family.

Several weeks ago, I wrote a story about Zarghona, for a womanâ€™s global communications network, "World Pulse". The WP story was based on the last information I had about her, which was several years old. Retelling the harrowing story of how so many people had come together to save Zarghona from a terminal heart condition, and how after seeing her on my last trip to Afghanistan, I had no further information on her, prompted me to reach out to Dr. Ismail Wardak, the Afghan doctor who had been instrumental in bridging the language and culture barriers we had to cross to save her.

The result of that effort are the two photos you see here: Top, a smiling Zarghona with her parents, and below, with the wonderful Dr. Wardak, one of Afghanistanâ€™s leading orthopedic surgeons. What do these photos tell us? 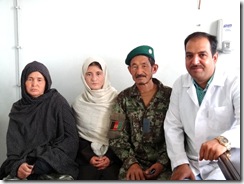 Do they tell us that the media focus on the woeful condition of the Afghan National Army is accurate? Do they confirm the hyperbole of the pundits and talking heads, many of whom have never been to Afghanistan or have little first-hand knowledge of the Afghan Army, or for that matter, of our extensive US efforts to train them, that when they portray the ANA as unable and/or unwilling to defend their own country, the media are ill-informed?

The Afghan people are frequently stereotyped as ignorant, unaware, or unwilling to build their own future. I challenge you to look at these photographs of this family: A father who is a professional soldier, like many of our own warriors; a loving stay-at-home wife and mother who when her child was dying, never left her side, and a young teenager with a sweet smile, who now has a healthy and hopefully long future ahead of herâ€¦

Look at them and tell me that Afghanistan is not filled with itâ€™s own warriors, men, women, and children, who are fighting a battle, each in their own way, to live their lives in peace and security.