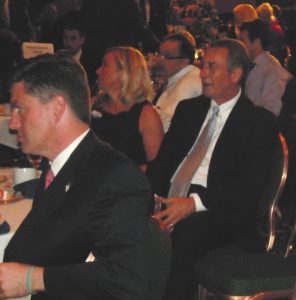 There are lots of benefits to being a writer; one of them is that in the pursuit of one story, you often encounter others. And so it was in Harrisburg at the meeting of the Republican State Committee.

Mingling with the crowd at the reception before dinner, discreetly writing on the notebook stashed in my purse, I was privy to conversations that ranged from a Party power broker talking about what little enthusiasm there is for Corbett and how much there is for Toomey. I heard a group of women decry the ongoing, never-ending “old boys club” that is the Republican power structure, and I got an earful from a committee person from the coal country who said the “outsiders” are ruining his town.

I like writing about politics because it’s the closest thing we have in a civilized society to gladiators going at each other in the Colosseum; a bloodless fight to the death. Yet for all its ferocity, there’s an ethereal quality that can be sensed and felt, but that can’t be seen or named. The Big Mo…that palpable energy caused by momentum, excitement, and the whiff of victory. In a ballroom filled with Pennsylvania Republicans, you could have cut it with a knife.

The State’s Party Leadership took turns introducing the room’s many VIP’s and revving up the crowd. There was particularly loud applause when Lt. Governor candidate, Jim Cawley, who was very smooth from the podium, introduced Tim Burns, who received national attention when he lost the spring special election for Tom Murtha’s PA-12 seat. Burns is again facing the same opponent, now incumbant, Mark Critz. 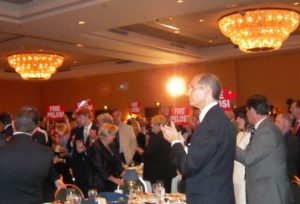 But the loudest, hand clapping, foot stomping, cheer of the night went to House Minority Leader, John Boehner. Once on the stage, he turned around and pulled down what had looked like part of the backdrop, to reveal a huge red “Fire Pelosi” sign. The Harrisburg Colosseum crowd was calling for blood. Fire Pelosi signs appeared everywhere.

No doubt this was a speech he had given before, but he never used a note and he never missed a beat. Defending the Tea Party, he said they were average Americans who had been driven in to the streets out of fear for their grandchildren’s future. He brought a gasp from the crowd when he said a total of 100 seats in Congress “were in play”, and there are more Republicans on ballots around the country than ever before.