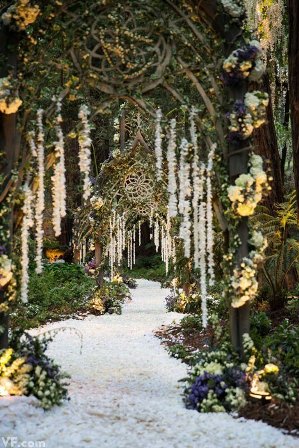 When I was growing up, one of the most frequently uttered threats from my parents was, “You will sit right there until you eat everything on your plate. Don’t you know children are starving in China”.Â  My knowledge, at the time, of starving children was limited to hearing about them over cold, soggy peas and I couldn’t find China on a map. But the American middle-class message, imparted to my generation of Baby Boomers by millions of Great Depression/WW II parents was clear: Waste not, want not; Be grateful for what you have; Remember those less fortunate, which, along with the country’s Judea-Christian values, is likely why the United States ranks as the most charitable, generous nation in the world.Â

That generous nature seems to have trickled down to the following generations with a slight twist: If I set up a charitable foundation and give to the less fortunate, I can spend as much money on myself and live as lavishly as I please. To wit… The recent wedding of, according to Vanity Fair, “social media baron”, ala Facebook and Napster, Sean Parker, to singer – songwriter Alexandra Lenas.

Now don’t get me wrong, I’m a free-market capitalist. If you earn it fair and square, it’s yours to spend however you like. Mitt Romney has an elevator in his garage, John Kerry and Teresa Heinz between them own five expensive houses, and David Tepper, of hedge fund fame tore down a perfectly good mansion in the Hamptons to build an obscenely bigger one with a sunken tennis court.

But in shear “I have it so therefore I spend it” fantastical audacity, the Parker-Lenas extravaganza takes the cake, the nine foot wedding cake that is.

The theme was “Lord of the Rings”medieval and the backdrop was a primordial forest that cost over $4.5 million to rent. The photographs, which appear in the September edition of Vanity Fair magazine and at VF online are simply breathtaking.Â  They also stretch credulity that mere mortals could create such a scene in the middle of nowhere for the sole purpose of one night’s revelry.

As I clicked through the photographs, followed by reading the story in the magazine; I’m a long-time subscriber, I had mixed emotions about the amount of money expended for such a self-aggrandizing reason. My artist’s soul was mesmerized by the beauty and creativity, the attention to every detail resulting in the closest thing to a living fairytale most of us are likely to ever see. And then there was my practical head which in I heard my mother’s voice saying, don’t you know there are children starving… if not in China, then somewhere.