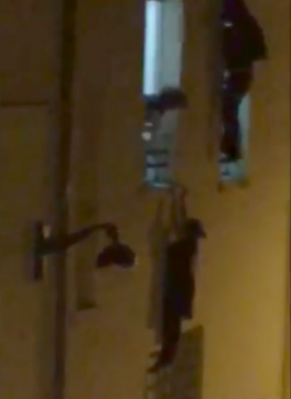 By now the images from Paris have permeated our consciousness and burrowed deep in to the valley of our soul. Close our eyes and we see thousands huddled together on a soccer field, bloody bodies on sidewalks, bullet holes in café windows, the moment of recognition by the band on stage.

Of all the horror we’ve seen these past three days, for me the most haunting of all is the desperate concert goers hanging, literally by their fingernails from the windows of the Bataclan venue; dangling two and three stories above the street. In one frame we can see someone rush to a window and grab the wrist of a pregnant woman who appears to be slipping. The video ends without our knowing whether those people were rescued or whether they fell to the alley below.

It is an image of total panic and desperation, reminiscent of the last time evil came to call on this scale. None of us will ever forget the photos from 9-11 of people facing such horror that jumping from a window was the best option.

I hate to admit it, but on some level the terrorists are succeeding: One need only to see the news footage from two days after the  Paris attacks, where a crowd who had gathered to hold a vigil was sent in to a screaming, rampaging panic by a random noise, to acknowledge that underneath the facade of resistance is a deep seated fear.

Heavily armed police and military patrols are a common and reassuring sight on our city streets, yet we know they cannot be everywhere. Gatherings of sport and entertainment will go on, but underneath is a wariness not present before.

Paris has changed us in some ways even more than 9-11, because after all these years, we have been shown that carnage can still happen on a mass scale.

One thing I’m changing: I won’t be using the expression, “Hanging by my fingernails” ever again.

What I’m not changing is my fervent hope and prayer that good will ultimately prevail over evil.