What a relief to read the story about the Women Air Service Pilots of World War II being honored in Washington with Congressional Gold Medals: Long overdue, but better late than never. After the insanity and betrayal of the past 24 hours involving â€œJihad Janeâ€, the lives well lived of Lillian Yonally, and her fellow pilots, was refreshing and inspiring.

What I found particularly moving about the story was that she never mentioned her wartime service to her family. According to a story in The Morning Call, Yonallyâ€™s son, Jack, said that while he was growing up, his father was the important military man in the family and his mother was ”just mom”. How typical of women from that time. 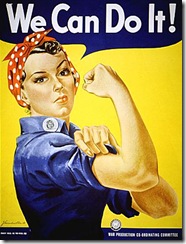 When you think about the self-absorbed, self-promotional culture that surrounds us now, itâ€™s hard to imagine someone who had performed such dangerous, heroic work, not telling everyone who would listen what they were doing. Today, theyâ€™d have a reality TV show and a book deal.

I remember my mother recounting tales of friends who went to work in factories, Rosie the Riveters , doing heavy dangerous work. And how even women who remained in more traditional roles, did â€œsomethingâ€, rolled bandages, wrote letters, volunteered at the USO, because the country needed everyone to pull together.

I hope before theyâ€™re all gone, our parents and grandparents know how grateful we are for their service and sacrifice and that they will always be recognized as our â€œGreatest Generationâ€.