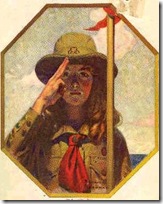 Honoring oneâ€™s social obligations is not always convenient but as my mother used to say, â€œGood manners is what separates us from lesser creaturesâ€.  (My mother was one-of-a-kind)

Tonight, despite lots of work and a pressing deadline, such an obligation required my attendance, so I washed off the writerâ€™s grime of the past few days, covered the sleep-deprived circles under my eyes with makeup, and went off to the Girl Scout â€œTake The Leadâ€ dinner at Lehigh Country Club.

The evening began with a reception that included the usual sponsor thank you remarks, followed by a group of really cute little Girl Scouts singing a song. The entire time all this was going on, Allentownâ€™s Mayor Ed Pawlowski sat in the middle of the room, not in the back or off to the side, reading his Blackberryâ€¦other than when his and his wifeâ€™s name were called, he never looked up once.

Call me old fashioned but I think when youâ€™re in the room, you should also be in the momentâ€¦weâ€™re only talking about a span of 15 minutes.

Once seated for dinner, the color guard marched to the stage, presented the flags, and everyone rose to say the Pledge of Allegiance and to sing God Bless America. It was right at about â€œLand that I loveâ€ that Mr. & Mrs. Mayor got up and walked out. Yes, you read this correctly. They couldnâ€™t wait two minutes till the song ended. They got up from their table in the center front of the room and walked out.

When the emcee began to acknowledge the politicos who were in attendance, and the Mayor was no where to be found, the woman said, â€œOh someone just told me he had to go to a city council meetingâ€. She looked perplexed when some people started laughing.

Itâ€™s a shame my mother is not here; She could make a lot of money as a consultant to politicians who obviously have no concept of â€œgood mannersâ€â€¦or good politics either.