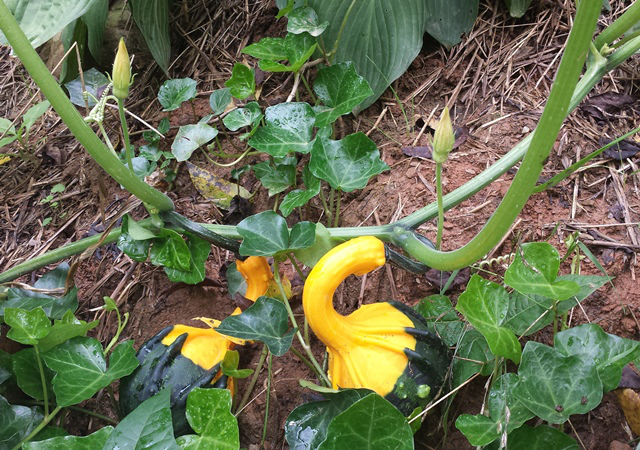 When Hurricane Sandy dropped a tree on our house last October, destroying our yard and patio, an important part of the security and serenity of our world came undone. To call that event “stressful” would be an understatement, but like many negative things in life, there are lessons to be learned and even a positive outcome or two.

When Spring arrived this year, we began to put Humpty-Dumpty back together again including lots of reseeding and replanting. Just outside our kitchen door was our favorite place, a lovely, shady, patio. The steep bank that protected and provided privacy for that patio was totally rearranged when the giant tree that lived there came crashing downÂ leaving a crater reminiscent of WWII and a slash of muddy earth that had once been a lush barrier to the outside world.

The landscaper did his best, within the limitations of our budget, to restore some semblance of green, but there were lots of barren brown patches and we knew it would take at least another growing season for that “scar upon the land” to heal.

One day I noticed a plant that had seemly sprung up overnight and one we definitely didn’t plant. It looked like a squash of some sort, but in its early growth stage I couldn’t tell. I asked my husband, a prolific gardener if, for amusement, he had planted something. No, he hadn’t and why would he plant a large vegetable in the middle of our hoped for butterfly retreat. The invader grew quickly and started climbing across and up the bank for some twenty feet. Soon it was covered in what were obviously yellow squash blossoms.

The blossoms have finally revealed their bounty… beautiful dual-colored decorative gourds, just like the ones I had in a basket by the front door last October when Hurricane Sandy came calling. The circle of life and a life-lesson wrapped up in a lovely little green and gold package. It reminded me that…

Life’s storms, both emotional and meteorological, can strip away everything you’ve worked for: Someone dies; someone doesn’t love you anymore; your children move away; your job is eliminated. The peace, security, and beauty that surrounded and sustained you are gone. Allow yourself to grieve, then take a deep breath and figure out the best way to move on. Begin again, planting as you go. 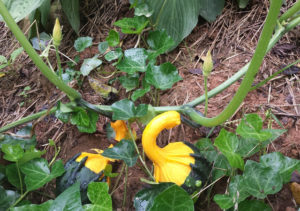 And most of all, remember, sometimes unexpected surprises may take root in your life…in the midst of your lovely new garden. Don’t look at them as weeds, as uninvited intruders, instead celebrate the chance to try something entirely different than you had planned. You may end up finding an exciting new life… or with a basket full of fall gourds.

The story of Christmas is about so many things; faith, kindness, and the triumph of the spirit even in the poorest of conditions. So is the story of saving Starâ€¦and in the process, saving ourselves.

Super storm Sandy was on her way; the weather maps showed her imminent approach. To ease my concern, I scrolled through Facebook to find comfort in the collective conscience of social media. I came upon a conversation between two acquaintances, one a realtor who had spent the day looking at potential listings. What she found in the back woods of Salisbury Township was a horse that appeared weak and underfed. Confined to a field with almost no shelter, the poor thing had only moldy food and little water…and he was about to be in the middle of a hurricane. Horses are survivors, they can withstand harsh conditions, but not if theyâ€™re malnourished or dehydrated.

I messaged the only â€œhorseâ€ friend I have, explaining the situation. Wenda Howe Boyer responded as I knew she wouldâ€¦ â€œWe have to do somethingâ€ was the consensus. We talked options: It was too late to trailer him to a safe place until the storm was overâ€¦her trailer was stored miles away, the storm was about to hit, and a horse trailer would get blown all over the road. The most practical option was to take him food and water in the hope that if properly fed, he could weather the storm.

Wenda would go to her barn for supplies, Iâ€™d get directions from the other women and weâ€™d pick a spot to meet. After multiple attempts to verbally describe the horseâ€™s location and then to find it on Google Maps, it was clear the animal was truly in the middle of nowhere. The other two women bravely offered to go along to lead us to the horse.

Iâ€™m a country girl; I know how to dress for a storm. As I appeared in the kitchen in my slicker fastened with metal bolts and my Wellie boots, my husband, with an astonished look on his face, said, â€œWhere are you going?â€ After decades of marriage, the fact that I was about to head out in a hurricane to rescue a horse didnâ€™t seem to surprise him. I heard a deep sigh as he rolled is eyes and said, Good Lord; you canâ€™t go out there alone. Iâ€™ll take you in the four-wheel drive. We traversed Allentown from the West End to the South side, picking up one of the rescuers along the way. The other would drive her car to meet us.

It was now dark out and the wind was whipping across the parking lot of a CVS pharmacy as four of us sat waiting for Wenda. When her pick up truck turned toward us, I laughed out loud: Her husband was behind the wheel: Another good man following his determined woman in to the fray.

By now, power outages were everywhere. Starting the climb up South Mountain on a narrow road it was hard to see twenty feet in front of the car. Branches and entire trees littered the road. Those that couldnâ€™t be seen could be heard crashing in the woods. A scene from the movie â€œTwisterâ€ flashed through my mind. To add to the tension, after the first two turns, I had no idea where we were.

Finally we turned onto a rutted dirt lane. It was pitch black, rain was coming in sideways, and the wind was now a steady 30 miles an hour when we pulled up to a single-wire fence.

Six flashlights began searching the darkness, when a pair of eyes caught the reflection. Heâ€™s hereâ€¦We found him. Even in those conditions; violent weather, flashing lights, loud voices, he came toward us. Wenda took the lead, carrying a fresh bale of hay in to what can only be described as a filthy, run-down lean-to. Hunger overcame shyness and he took some food from her hand, and then ran off to hide in the darkness.

Assessing the condition of the lean-to; it needed repairs and a good mucking-out, we concluded there was not much more we could do that night. Just as that consensus was reached, an enormous gust of wind, the worse so far that evening, almost knocked us off our feet. It was clear the storm was worsening quickly. We needed to find our way out of the woods and back to civilization, leaving our equine friend with fresh food, water, and our prayers.

On Emaus Avenue, our little band of rescuers peeled off one by one, wishing each other well as Sandy bore down on us. My husband and I retraced our route through Allentown and were crestfallen to turn up our street and find it in total darkness. We were cold, tired, and despite my best efforts, soaked to the skin. There would be no warm house, hot shower or cooked food.

Less than an hour after returning home, while sitting at our kitchen table, bathed in lantern light, a blast of wind with a velocity that made it sound like a jet plane, shook our entire house. The wind seemed to subside, then we heard a creaking and cracking that became louder and louder until it was a giant roar followed by an enormous bang.

My husband tried to open the back door but could only create a gap large enough to extend his arm and the lantern. I heard him gasp. The giant Hackberry tree that stood on the bank up over our patio had come crashing down on the house.

We were relieved to see the flashing lights of the Allentown Fire Dept who came to rescue us in the midst of the storm, and grateful to our friends Vic and Jody Mazziotti for offering us shelter in the middle of the night.

The next day as we surveyed the scene surrounded by engineers, contractors, and equipment, more than one expert commented on how fortunate we were that such an enormous tree had miraculously fallen at a slight angle and not straight down on top of us, how if it had, we would have never escaped unhurt.

I have always believed that the energy you put out in to the universe comes back to you.

Call it karma, or fate, or whatever you like. And so, in the middle of one of the worse storms to ever hit our region, I believe the â€œhorse angelâ€ saved us… Our personal, October version of a Christmas miracle.

Epilogue: The beautiful white horse that six adults risked their lives to save is named â€œStarâ€.

Wenda visits him regularly with his favorite treat, carrots. Through her contacts she found his owners and has been able to â€œmotivateâ€ them to take a little bit better care of him, although not at the level that she and I think is appropriate. I accompanied her last week to see him and am glad to report that he has gained some weight. Heâ€™s a beautiful creature with soulful eyes and I pray for his comfort and safety. I will continue to tell you about him as his story unfolds.