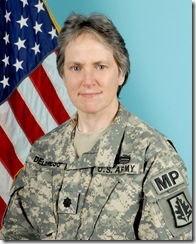 Teri Delbalso was just like any other little girl growing up in Schuylkill County, Pennsylvania. A childhood she describes as â€œvery niceâ€ included playing Barbie Dolls with her kid sister Nikki. Throughout her years at Hazelton High School and Penn State, where she graduated with a BS in Administration of Justice, Teri dreamed about her â€œperfect jobâ€, but the dream was elusive. She thought about joining the military: Several dead-end jobs later, she took the plunge and joined the Army Reserves. Her training kept her away from home for nearly a year, first at Ft. Jackson, NC for basic training, then Officer Candidate School at Ft. Benning, GA, followed by a basic course for Quarter Masters at Ft. Lee, VA.

After five years posted at the Army Reserve Center in Williamsport, PA, that dream job started to come in to sharper focus. She applied for and was accepted to an advance course to become a Military Police Officer. â€œIt was something I always wanted to doâ€, she says, â€œI just had to work my way up to itâ€. Upon successful completion of her training, Teri was transferred to the Military Police Unit in Ashton, PA, where sheâ€™s been serving, and moving up through the ranks, for 16 years. Today, Teri holds the rank of Lieutenant Colonel and is Commander of the 424 Military Police Detachment.

Those years of service have included two tours of duty in Iraq, in 2003-04 & 2008-09. Teri describes the first deployment as being â€œon the cusp of the invasionâ€ and the conditions as â€œa harsh environmentâ€. It was also extremely dangerous. Driving back to the base, after dark, through Baghdad, their convoy came under fire by RPGâ€™s. â€œThe guys firing at us were bad shotsâ€, so between their return fire and defensive driving moves, Teri and her team stayed safe. Many others did not. â€œOur base was bombed every night; I mean every night there were incoming mortar rounds. People died around me.â€

The second deployment was calmer; there was more security, better living conditions, and superior radar that detected anyone approaching the base.

Teriâ€™s training and experience in the military led her toward that dream civilian job sheâ€™d thought about years before. For 7 years she held the distinction of being the first woman police officer in the history of McAdoo, Pennsylvania. In 1994, she joined the PA Department of Corrections, working out of the Hemlock Creek Medium Security Prison, where she is the State Prison Department Superintendent in charge of programming and treatment.

With four years to go till her goal of retiring from the military with 25 years of service, Teri says, â€œItâ€™s been a great ride. Iâ€™ve been all over the world, all over the US; Iâ€™ve seen places I would have never otherwise seenâ€

She encourages other women to think about a military career. â€œDonâ€™t run away from it. You can discover yourself, finding talents and strengths you didnâ€™t know you had. The Army is what you make itâ€¦if you can carry your own weight and be a team player, it can be a good lifeâ€.